Peter, a 75-year-old widower, lives on the south coast of England with his five dogs, and a workshop full of Meccano. For over sixty years his passion has been building working Meccano cranes. OVERVIEW
REF: What is Meccano?
Meccano is not just a toy; at the time of its inception over 100 years ago, it was instrumental in fanning the fire of curiosity for young boys who would later become engineers of the 20th century. It has a standardised system of equidistant spaced holes 1⁄2 an inch (1.27 cm) apart, which are set in metal strips and angle brackets. These are held together with tiny conventional brass screws and nuts. The addition of miniature engineering components such as cranks, bevel wheels, couplings, pulley wheels, gear wheels and pinions, have increased its versatility to allow the builder to make numerous working models.
First of all, could you tell us a little bit about yourself?
I grew up around North West London, Barnet and went to a public school on the Isle of Wight. After I finished school, my plan was to become a farmer. That didn’t go quite to plan and I ended up joining the Army.

What regiment did you join?
I was in the 2nd Royal Tank Regiment, where I stayed for my twenty-two years, attaining the rank of Sergeant.

…and after the Army?
I completed my time in Germany doing trials work during 1976/77, when they were trying to reduce the size of brigades. Then I finished my last four years teaching recruits at Catterick Garrison. When I left the Army, I got a job at an engineering firm, in an administration role, looking after three companies. When the crunch came in around 1990, my job was shared out among three other people, so I left and went to Westminster School in London, where I stayed until I retired in 2006.

BITTEN BY THE MECCANO BUG

When were you first aware of Meccano?
I started, like a lot of my generation, when I was a boy of about 7 or 8, I even took it into the Army with me!

So it’s been a constant hobby for you then?
Actually, no. Towards the end of my Army career I got into model railways. Ironically, German models which are the ‘HO’ scale. I brought them back to England when I retired, and had a track layout in my attic.

REF: Wikipedia HO Scale models
HO or H0 is a scale used in model railroading. It is the most popular scale of model railway in the world. In most English-speaking markets it is pronounced “aitch-oh” and written with the letters HO today, but in German it is pronounced “hah-null”, and still written with the letter H and number 0. The HO scale is 3.5mm to 1 foot with the ratio being 1:87.1.

Some railway layouts can get quite large?
Mine was roughly 14 ft x 13 ft, running round between the purlins of my attic roof. As soon as I’d got it laid out, with all the scenery completed, after about four years, I lost interest [Laughs]. Having swapped all my Meccano for model railway bits and pieces, I then sold all the model railway parts to buy back Meccano, which was more suited to my nature. 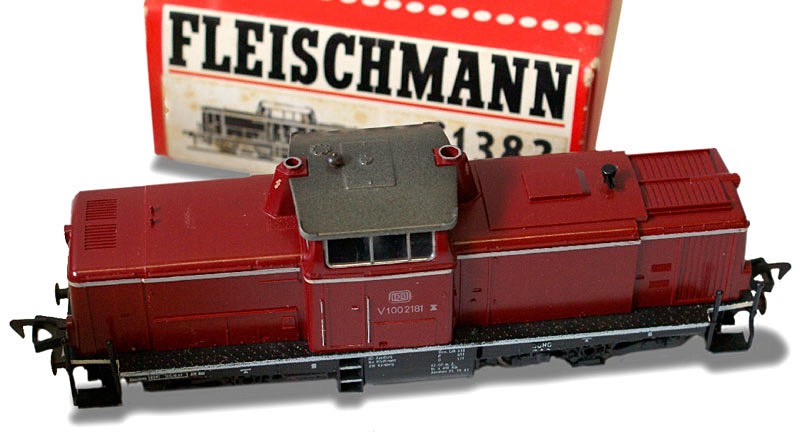 What do you mean by, Meccano suited you better?
With the model railway, once I’d completed the set-up, all I found myself doing was watching the train go by. I’m more of a hands on ‘doing’ sort of person. With Meccano, you’re always building something, and it’s environmentally friendly.

Meccano is actually quite a ’green’ toy and not just in the colour. Once you’re fed up with the model, you can dismantle it, put the bits back in the boxes, ready to build something else using the same pieces

What’s your main area of interest, model wise?
I like building steam cranes because you can see what the gears do, that aspect fascinates me. Modern cranes, with electric dynamo motors, you can’t see the inner workings at all. 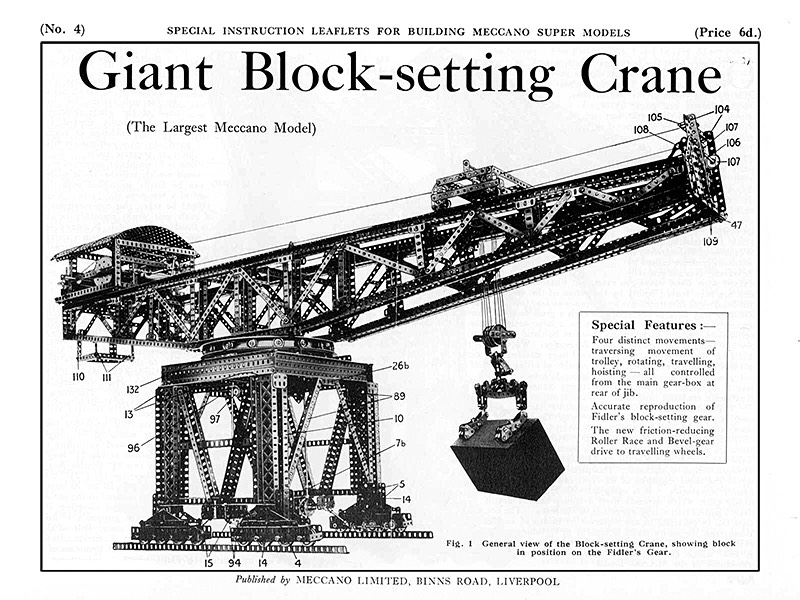 REF: A Block Setting Crane
A Block Setting Crane does not require height to unload ships, which float higher in the water as they are unloaded, and the Tide does not affect it. The only height needed is to allow a Train Truck loaded with a 50 or 60 ton block to pass underneath, then for the Block to be lifted clear, [6 to 12 inches, run out, then lowered into position to create a Pier/Sea Wall/Jetty etc.] A Block Setter can also move to continue its own construction.

Do you have an engineering background, from the Army or elsewhere?
Not at all. I joined the tank regiment because I wanted to be a gunner. When I joined in the 1950’s/ 1960’s it was the end of conscription, and a regular going in then got what he wanted, regardless of whether it was suitable or not [laughs], so I never got tested. I said ‘I want to be a gunner’ and the recruitment officer said ‘you want to be a gunner son, a gunner you shall be. Sign here.’ So I joined and went to North Africa with the 2nd Royal Tank Regiment. Turns out that I was not a very good tactician, I was more of an admin or support person in the Army. So I worked signals and battlefield communications which I was quite good at, but I was no good at commanding a tank [laughs].

Why model cranes and not anything else?
I have built other things, tanks, recovery vehicles, cars, but cranes are my real interest and passion and it’s what I keep returning to. Meccano can be used to build whatever takes your fancy, for me, it’s steam cranes. A lot of the models that were built back in the early days were often cranes. Of course today it’s very different, but I’m still ‘old school’ in what I use and build.

You must have built up quite a collection over all this time?
Even during the pre Meccano days of ‘Mechanics Made Easy’, the sets, or ‘outfits’ were created following a modular system of numbers and letters. The idea was that once you had purchased your first set, no matter how far up the range that was, you could buy a ‘conversion’ or ‘accessory’ set to take you up to the next largest outfit. It was a way of keeping costs down for the buyer, who didn’t have to buy a complete new set. The lowest numbered set, in the early days at least, was #00 with the highest, or largest set being #10.

REF: Frank Hornby
Frank Hornby, the creator of Meccano, patented his new toy in 1901 and called it ‘Mechanics Made Easy’. Initially there was only one set available, but it wasn’t long before a range of different outfits became available. In 1907 the word ‘Meccano’ had been registered and, in June 1908, Meccano Limited was established. [Add image of Frank Hornby to Ref] 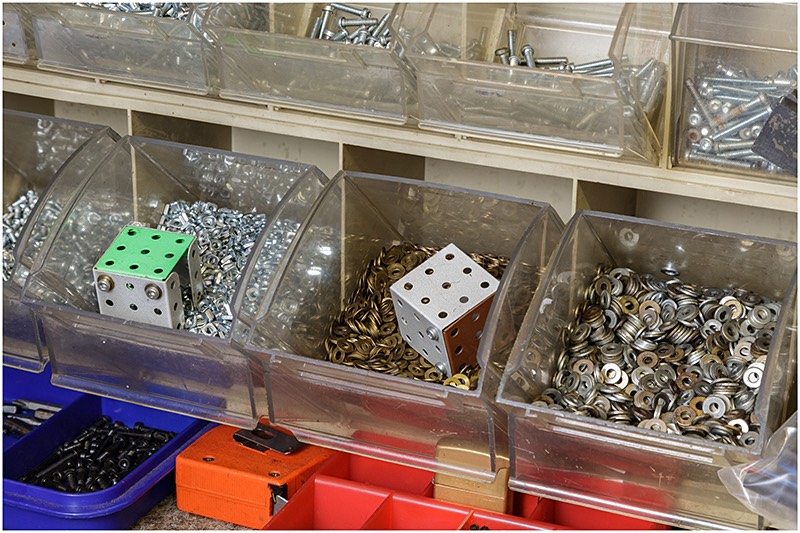 What sort of price were these sets?
Back in the late 1940’s, early 1950’s, a #10 set would cost around £35. For collectors, some of those sets, depending on condition, can fetch thousands of pounds now. The very early sets came in wooden cases, not viable for mass production, and they were soon dropped when it became popular.

What’s the largest set that you have owned?
I have the contents of about fifteen or sixteen #10 sets in my collection, but I’ve never personally bought a #10 set in its own right.

How do you acquire your parts?
All sorts of places. On one occasion, before I retired from the Westminster School, an ex-Army friend of mine pulled up outside in a Luton van. He came inside and asked if I was still buying Meccano. I said, “yes, what have you got?” He said, ‘I’ve got a ship’s trunk out in the van, full of the stuff, which you can have for £200’. So I went out to have a look, but he said, “you can’t open it because there will be Meccano everywhere. You have to trust me and buy it unseen.” The ship’s trunk was 4ft x 3ft and 3ft high to the bottom of the lid, which was domed. It took three of us to get it off the back of the van! We took it back to my house and I laid a sheet out in the living room and, to my wife’s utter horror, when I opened the lid, Meccano just poured out of it everywhere. There were some very rare items in amongst it, so my money was easily recouped. I struck lucky with that one.

There were some very rare items in that trunk, so my money was easily recouped

Do you still buy Meccano now?
That ship’s trunk was my best buy. I’ve had other acquisitions over the years, but I don’t tend to purchase any now unless I actually need something specific. I’ve got that much of it in the garage that it’s no longer necessary.

To be continued …
Part 2