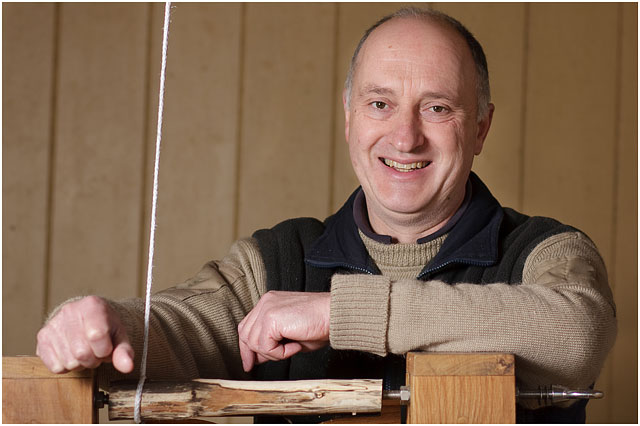 A chip off the old block

Fancy a change? Bob did. In 1993, after 23 years as a Commercial Conveyancer (a specialist property lawyer) based in the Midlands, he had the opportunity to take early retirement.  Management responsibilities, enormous budgets, and a high stress career had taken its toll. Bob, like many of us, yearned for the simpler things in life …

As a young boy with his family he had spent many holidays on the Isle of Wight off the south coast of England. There was something about the place that had always appealed to Bob. Maybe it was the slightly slower pace of life, maybe it was the glorious scenery. Whatever the attraction, Bob found himself setting up home there and thinking about what to do next. 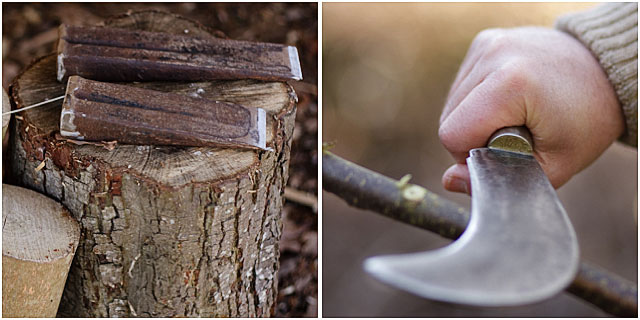 The thing that was missing, Bob reasoned, was some form of hands on creativity. He knew, from earlier interests in woodturning and carving, that it had to be something to do with working with wood. After taking courses in ‘hedge laying’, ‘ecology’ and ‘conservation’, Bob had a broad idea of the general direction to take. 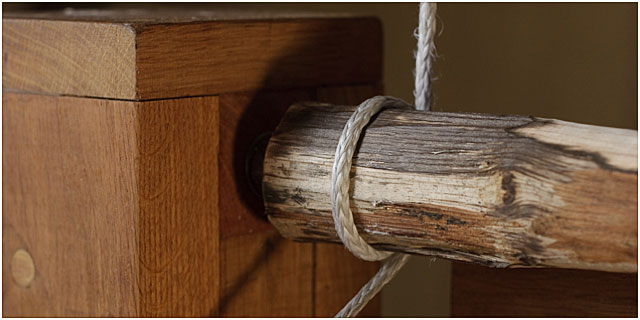 He applied for a volunteer job on an estate, with extensive gardens and woodland maintained by a small dedicated band of full time staff, now joined by Bob and several other volunteers.

Bob fell in love with the place and the way of life. So much so, that he has been there for the last ten years. In that time he has moved on from working initially in the gardens and surrounding area, to the place that is the final piece of the puzzle.  Bob, for all intents and purposes, is a woodsman.  He, and fellow volunteers, have over the years helped with the plan to restore the woodland to its former condition as working woodlands, opening up vistas to the sea and giving the indigenous woodland habitat room to breathe and thrive. 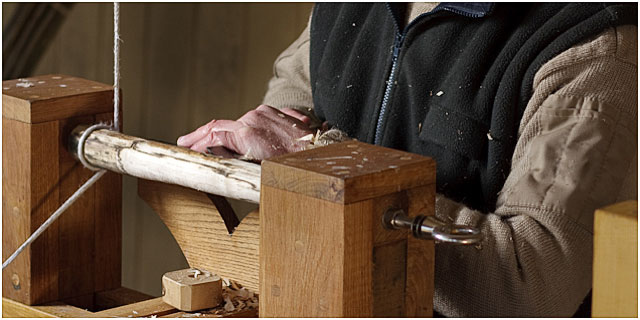 Not a man for grand, long term plans, Bob has more of a ‘what if or lets see where this goes’ kind of philosophy. In 2009, in true ‘Bob’ style, he decided upon a small self-initiated project to build a ‘Pole Lathe’ and an associated ‘Shave Horse’, in the woodland area.

Bob wanted to put some of the wood that had been cut down in the woodland to better use, and help encourage further interest amongst the other volunteers in green woodworking, and it seemed appropriate that some form of traditional craft should be used to facilitate this. Enter Bob’s pride and joy. Pole lathes were, more often than not, made on site with the materials to hand; hence their simple but efficient design. Bob’s has been built with that design principally in mind, but with more substantial wood and materials, because it has to survive more than one season, and adapted so that the single long pole originally used is replaced by an overhead rope and elastic spring on parallel upright poles. 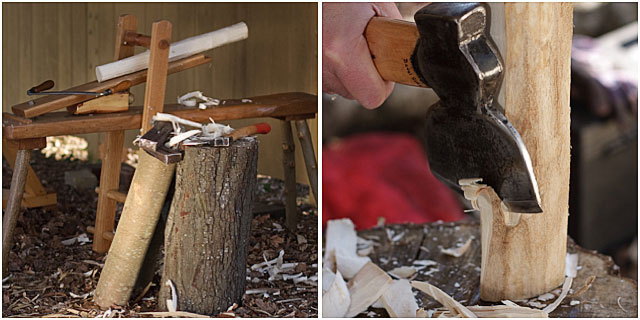 Historically, one of the key uses for a pole lathe, was to turn chair legs and spindles. Wood of suitable size was logged ready for this use by craftsmen called ‘Bodgers’, a name which has, unfortunately, become a derogatory term in modern day parlance. The logs were then split into quarters (billets) using a mallet and metal wedges, and trimmed to be roughly cylindrical with a traditional side axe. The craftsman would further refine the shape using a ‘draw knife’ whilst sat at the ‘shave horse’. The finishing stage was to turn the legs and spindles on the pole lathe ready for their final use. Furniture makers would visit the bodgers at regular intervals and buy their stock of legs and spindles for making up into the finished chairs.

Wikipedia description:
A pole lathe is a wood turning lathe that uses a long pole as a return spring for a treadle. Pressing the treadle with your foot pulls on a cord that is wrapped around the piece of wood or billet being turned. The other end of the cord reaches up to the end of a long springy pole. As the action is reciprocal, the work rotates in one direction and then back the other way. Turning is only carried out on the down stroke of the treadle, the spring of the pole only being sufficient to return the treadle to the raised position ready for the next down stroke. While the action of the pole lathe and the skills required are similar to those employed on a modern power lathe, the fundamental difference is that the timber used on a pole lathe is unseasoned and freshly felled.