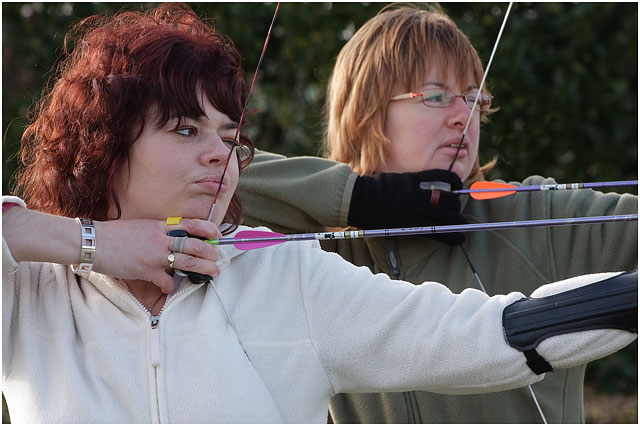 Michaela and Sue have you in their sights.

It’s surprising what you can achieve in eighteen short months when you set your mind to it. …

After the two women in our story became friends, just over three years ago, they decided to attend a beginners’ archery course at Portsdown Archery Club in July of 2008. Michaela, on the left in the picture above, was following in the steps of her husband Richard who, at aged sixteen and a junior, had become Southern Counties Champion whilst a member of the same club. However when he started work at seventeen, archery took a back seat. It wasn’t until 2008, now married to Michaela and having moved back to the Portsmouth area, that he wanted to know if his old club still existed. It did, and had continued to flourish. So Richard decided that he would like to get back into archery and Michaela chose to join him. The first year was spent worrying about actually reaching the ten-yard mark, let alone any of the other hundred and one demands of the sport. 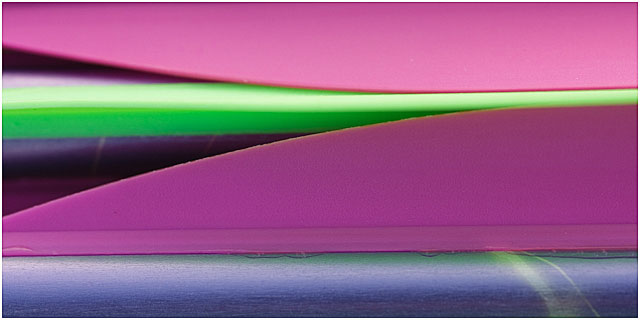 It would seem that, despite these initial concerns, Michaela has some natural talent for archery. Since that first beginners’ course, and subsequently taking up the sport, she has made great advances, and 2009 was a good year. The list of achievements is impressive, with the most notable, becoming the ‘Ladies Recurve Champion at Club Championships’. Add to this the ‘Flinton Horn Trophy’, the ‘Summer Ladder Trophy’ and, in partnership with her husband Richard, the ‘Perpetual Partners Rolling Pin’ and the ‘Forest of Bere Bowmen Crookhorn’ indoor shoot, and you can see that Michaela is serious about archery. She even named her driving school ‘arrow school of motoring’, at the suggestion of Richard, several years before actually firing a single arrow! 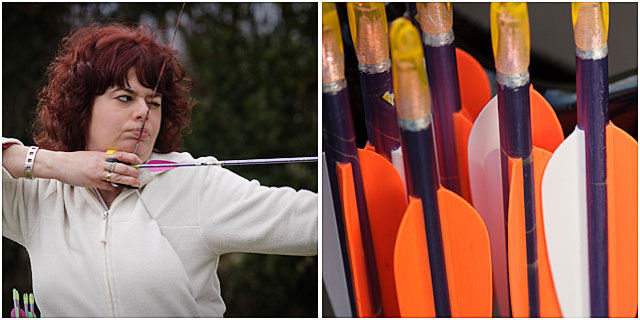 Sue’s path is somewhat more convoluted. She was first tempted to try archery some seven years ago, whilst living in Locksheath. Somewhat unusually for a bowman, Sue has a dominant left eye, but is naturally right handed. For most other sports this would not be a problem, but for archery it presents a unique handicap, at least for beginners. Left-eye-dominant archers hold the bow with their right hand, have their right side facing the target, sight towards the target with their left eye and handle the arrow and string with their left hand. But, with Sue being right handed, this was counter-intuitive and also problematic for training the sets of muscles used for archery. Sue struggled on, but try as she might, she could not get beyond the basics and was just not comfortable. Not surprisingly, she thought it was time to accept defeat. 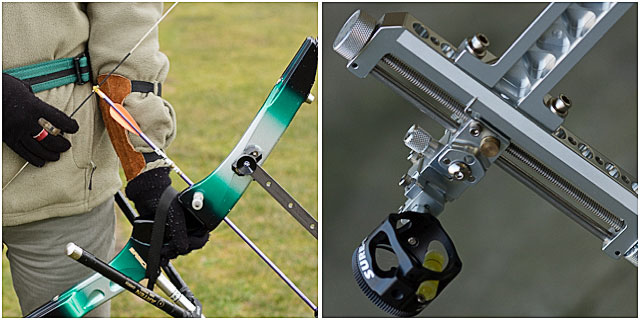 A move to Stubbington, and the new friendship with Michaela, changed everything. A chance comment during a night out eighteen months ago with their respective partners, Richard and Nick, revealed a common interest, and shared experience in archery by the two men. Michaela said that she was about to attend a beginners’ course in Portsmouth for the first time, and why didn’t Sue come along? After some discussion about Sue’s eye dominance problem, she agreed to give it another try. This time around things were different. Sue decided that, rather than fight her body’s natural inclination to be right side dominant, she would adopt a right-eye-dominant stance and close her left eye. Sue is still retraining her body and having to ‘unlearn’ the earlier experiences. Sighting with the non-dominant eye is not ideal for long distance accuracy, but at least she can now enjoy the sport which she loves. Sue has been awarded the ‘Ladies Handicap Medal’, has gained a Bronze in Club Championships and a Silver for the ‘Indoors Ladies Trophy’ last year. So, clearly, she is now on target [LOL] 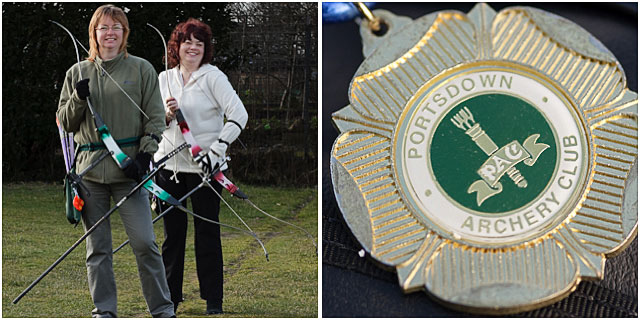 Michaela and Sue both shoot at the Portsdown Archery Club which has its own ground and clubhouse based in Portsmouth. The club history stretches back to 1945 and it has been in its current location since 1971. Some of its members have been shooting for over forty-five years, and two have gained the lofty status of ‘Master Bowman’. This is still a male dominated sport, but the title can, and does, apply to both male and female archers. The club has a ‘have a go’ day, which is open to all, on the 24th April 2010, and the next ‘beginners course’ starts on May 8th 2010. See the web site for club location and further details. 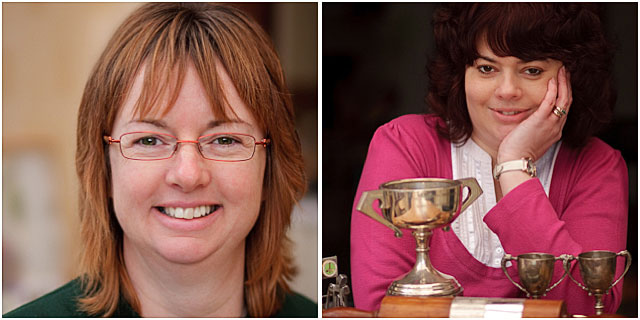 By the way, if you want to know if you have a dominant eye, try this. Point at something across the room with both eyes open, close one eye. If your finger appears to jump to the left or right, depending on which eye you closed, that is your dominant eye. Now try the other eye. No change? Well, not everyone has a dominant eye!