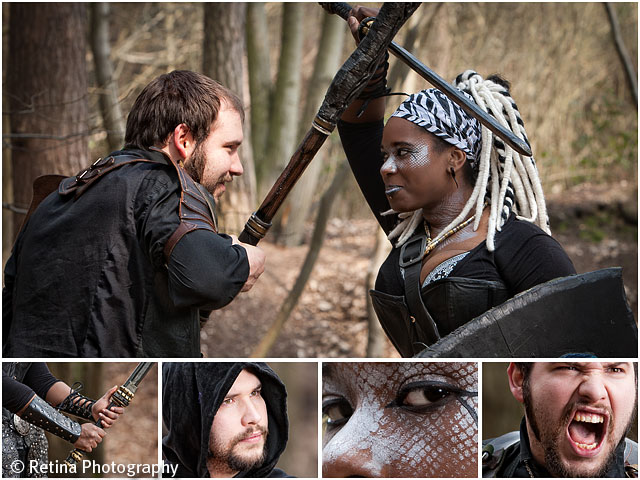 You and who’s army?

Adam describes ‘LARP’, or ‘Live Action Role-playing’ to give it its full title, as the combination of ‘cross country pantomime’ with a ‘costume party’ based rule system. Perhaps not the most glamorous description, but possibly one of the more accurate! … To quote Wikipedia: “LARP is a form of role-playing game where the participants physically act out their characters’ actions. The players pursue goals within a fictional setting, represented by the real world, while interacting with each other in character. The outcome of player actions may be mediated by game rules, or determined by consensus among players. Event arrangers, called Games Masters, decide the setting and rules to be used and facilitate play.” 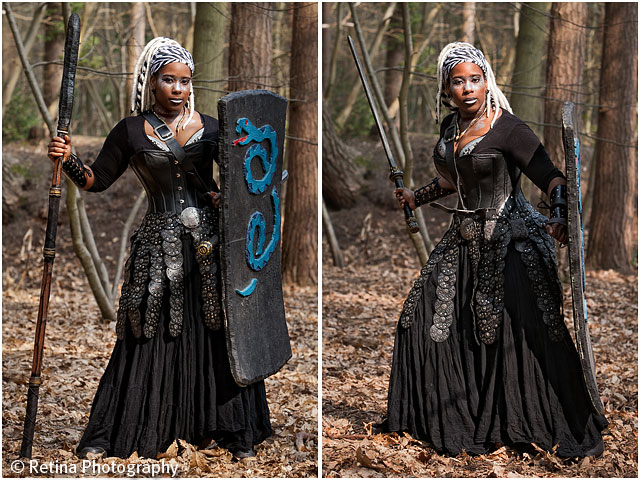 Born out of the tabletop role-playing games of the late 1970s, such as ‘Dungeons and Dragons’, LARP has evolved into an internationally recognised form of dramatic and artistic expression. The LARP community exists in the form of ‘systems’ which could best be described as representations of alternate realities or worlds. Each ‘system’ has, at it’s head, an administrative body which organises ‘events’ and maintains a loose set of rules for system members. Systems such as Lorien Trust, Maelstrom, Crimson Requium and Herofest, to name but four, have many thousands of members. Approximately four times a year, large ‘events’ are held, over extended weekends, in forest and scrubland areas around the UK. Attendees camp out and interact with each other, in character, for the duration of the weekend, whatever the weather. Interacting can cover a wide range of activities and may be goal driven, emulating computer game quest or more physical scenarios. It is not unusual for pitched battles to be part of the agenda with the aim of scoring points for winning fights or tricking opponents. 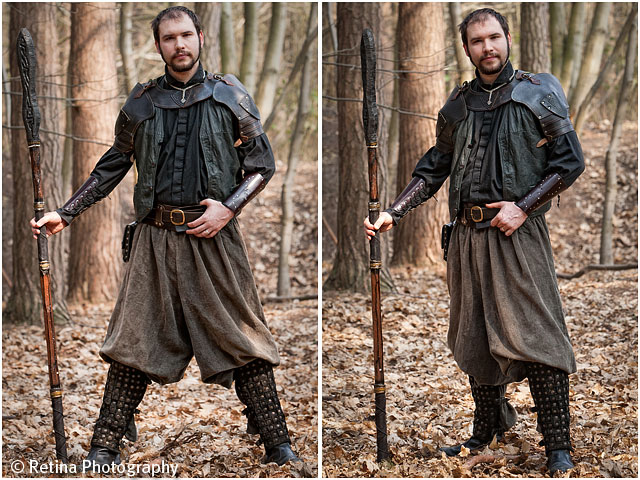 The basic premise is that an event, small or large, will have a theme with a loosely structured storyline that the participants will use as a starting point for character and role playing. One of the key differences between LARP and any other form of dramatic re-enactment is that the story is, effectively, never ending. The characters’ ad libbed interactions determine the way in which the story unfolds, and each game becomes yet another episode in the story. 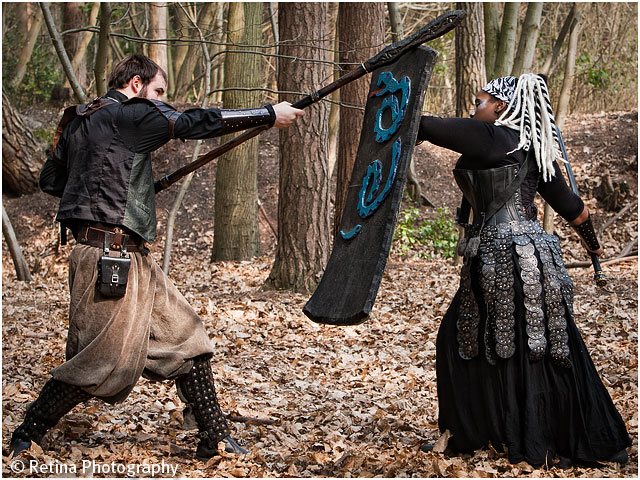 The hundreds of clubs dotted around the UK will often participate in smaller events, some as short as a few hours, held by spin-off groups throughout the year. The only proviso is that they must be sanctioned by the overall system organisers to which the factions belong, and the sideline story must not have an extensive impact upon the central narrative of the larger events. Once approved. these smaller events will have a marshall or referee, provided by the system organisers, to oversee plot twists and any possible impact on ‘world’ events. This can be an opportunity for the players to embellish their characters’ traits and develop stronger faction and social bonds. In some cases, the smaller games are designed to take place once, perhaps over a single weekend, during which the players convene for that one game and then disperse. 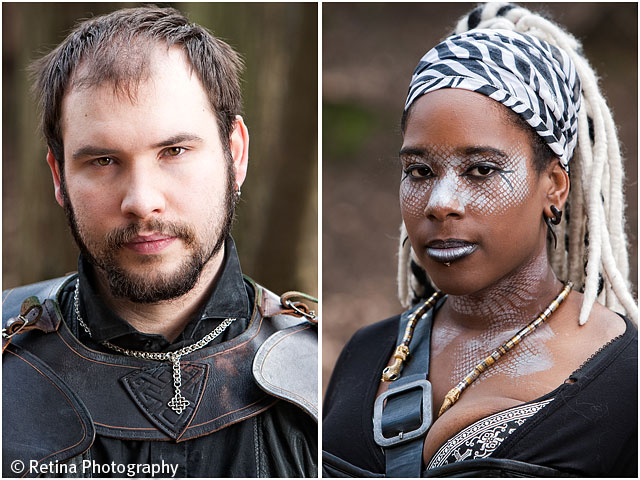 Although many LARP players choose the Dark Ages or Medieval period in our history as a setting for their games, the choice of other historical periods is not uncommon. The early 18th Century and Victorian era are popular, whilst some opt for Science Fiction or Fantasy settings. The period on which the game is set determines the dress code, although players are really only restricted by their own imaginations. These fantasy worlds are inhabited by monsters, magic and treasure, and contain ever evolving social networks. More commonly, the players belong to groups, or factions, of similar characters. These factions can be large or small and grow and shrink organically. Players are free to come and go within any group as they see fit, but, as with any social circle, tend to mix with like-minded individuals. 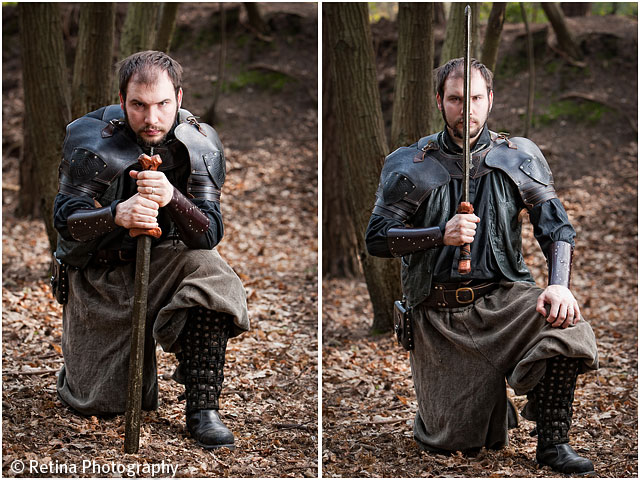 LARPs are enjoyed by players of all ages, genders and backgrounds, despite the common misconception that they are only for teenage boys. Many players grew up LARPing with their parents and met their spouses at a game or convention. Children, as young as four or five, enjoy there own independent storyline and, as they grow up, they have the opportunity to carry with them any skills or points they have gained into the adult system. LARPs can be considered an interactive form of literature, an audience participation type of theatre, or just an engrossing game. To many players, the games are both a social activity and a way of life. The Lorien Trust started up in 1991 and has been running events since the mid 1990’s. Not just a small niche interest area then. 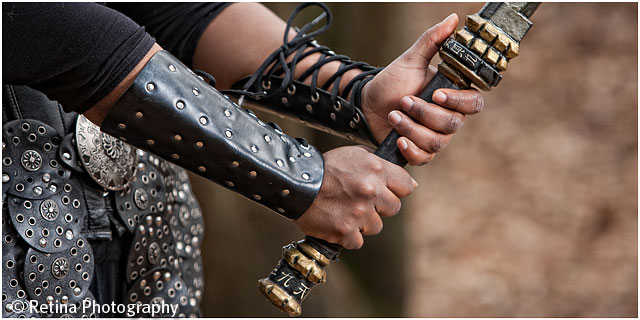 Adam, with his wife Mel, have been involved with LARP since their days at University. Adam, originally from Bodmin, Cornwall, was introduced to LARP whilst attending a table top wargaming night at a local Games Workshop venue in Swansea. A workshop attendee, who was the head of one of the local LARP clans, brought in some LARP weapons to try and drum up interest as part of a recruitment drive. The local faction was the ‘Bears’, a Scottish/Pictish group within the Lorien Trust system. Adam was immediately taken with the whole idea and joined up at the first opportunity. 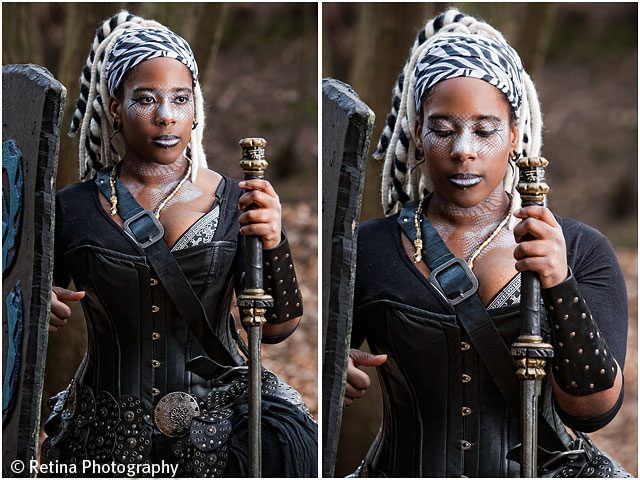 Each faction within the Lorien system is named after an animal. Within the Bears faction are sub groups called ‘Clans’. The Clan Mcgregor being Adam’s. In his words “the Bears (in true Medieval fashion) are basically lots of people in kilts shouting things in Scottish accents, occasionally fighting, then sitting around campfires drinking a lot and talking about it.” We should, of course, qualify LARP fighting by saying that, whilst it can be vigorous, it does not entail the actual spilling of blood or breaking of bones. Any actual fight or skirmish is about scoring points by making contact with specified points on the body. There may be the occasional bruise, but not full-on bloodshed, unless accidental.

LARP weaponry can be bought from traders, but part of the enjoyment for players is designing and building their own. The weapons themselves are made from a variety of materials, but the main ‘contact’ part of any weapon is made from foam rubber or latex with a fibreglass core. All weapons, whether home-made or bought, have to be approved by Games Masters at each event, and are rigorously checked on a regular basis to comply with strict Health and Safety rules. The aim is to score points, but not to actually hurt someone! 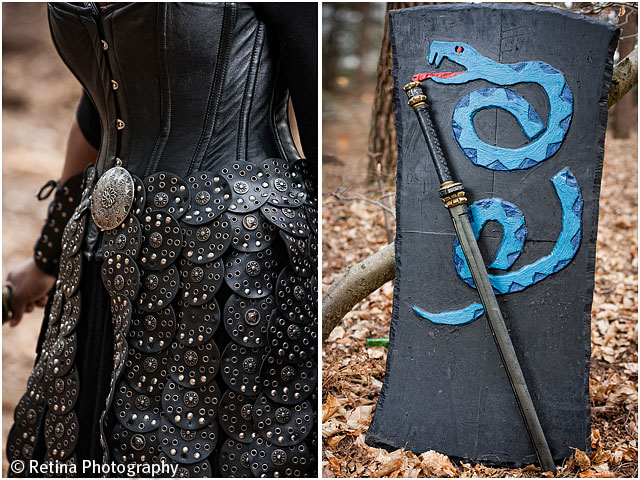 When creating a character, players have some choices to make. A basic character starts out with sixteen points to spend as they see fit. The players will decide what role they will be playing and the choice of skills required for their character. The Lorien Trust system, unlike ‘Maelstrom’ for example, has at its heart a storyline which revolves around battles and their outcome. As such, the initial creation of a character will entail the purchase of fighting skills and body protection, such as armour, for use when fighting opponents. The greater value the skill, or the more heavily armoured a character is, the more body blows they can sustain without being injured or killed. 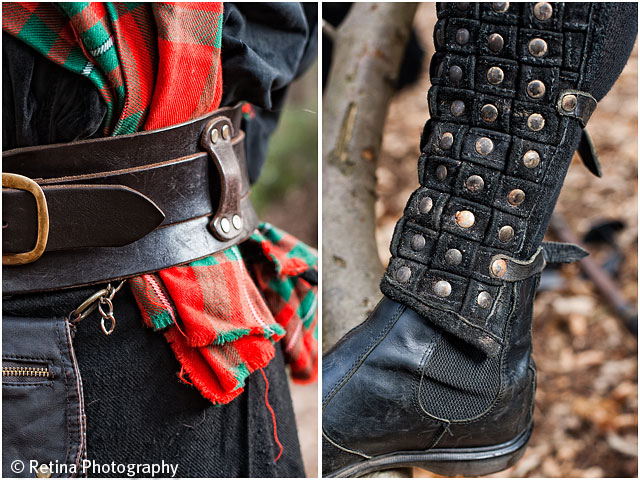 Fighting, whether one on one, or in a faction skirmish, relies on trust. Each player, knowing their own skill and body protection value, is expected to count, approximately, the number of blows taken, and react accordingly. Over time, and with additional training, each limb (legs, arms, head and torso) attains a certain ‘health’ value. To start with, this will be one point for each limb. The toughest basic characters can have up to six hits per body location and three hits for heavy armour, chain mail, steel plates etc, plus extra protection because of any additional training. The weapon used in a conflict does not carry additional value, only the body blows themselves. In this way, all weapons are considered equal. If and when you reach a health value of zero for each limb, you are effectively dead and will have to create a new character from scratch. The only real rule, as such, is ‘Rule 7’; ‘Don’t abuse the system for personal gain’. 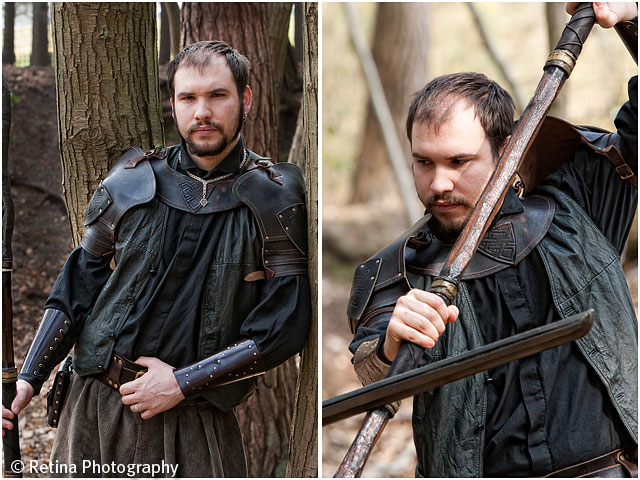 Adam has changed his character a number of times over the years, but has currently settled on being an ‘Incanter’, a kind of medieval priest capable of casting spells. The priest’s weapon of choice is a mean looking, self modified, 6ft long spear. Adam has acquired several small weapons and associated extras at various events, but says that he is wary of the ‘curse of the new kit’. This is where fate conspires against players who purchase new equipment at the start of an event, only to be killed off fairly quickly! So what’s on the horizon for this priest of the Mcgregors? ‘I’m hoping to move up to ‘Dark Incanter’ this year, but it means joining a ‘guild’ outside of The Bears to get some extra training and skills’ says Adam. ‘Mel and I definitely want to go to the largest end of year event, ‘The Gathering,’ in August. Maybe the ‘Great Erdrejan Fayre’ and, time and money permitting, a few smaller events during the summer. I’m fairly active on the faction forum, so I’ll be developing my character there as well.’ 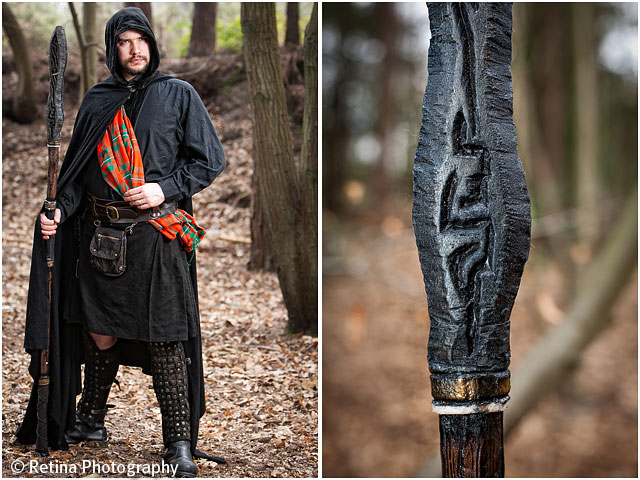 My advice, if you see a large priest lurching towards you in a muddy field, brandishing a spear and muttering medieval celtic spells under his breath, is stay well clear. You might have a fight on your hands. 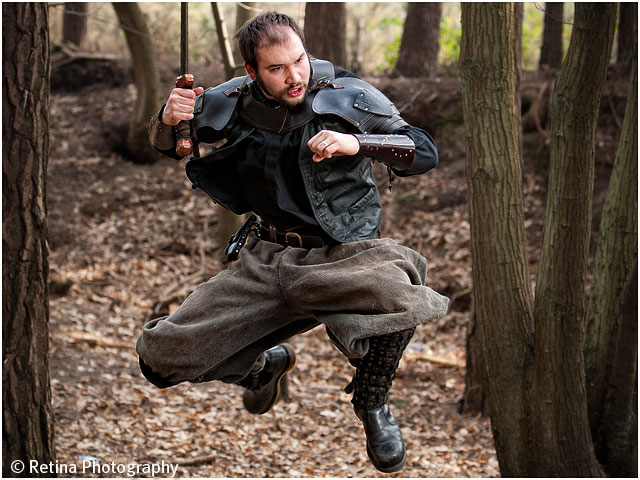