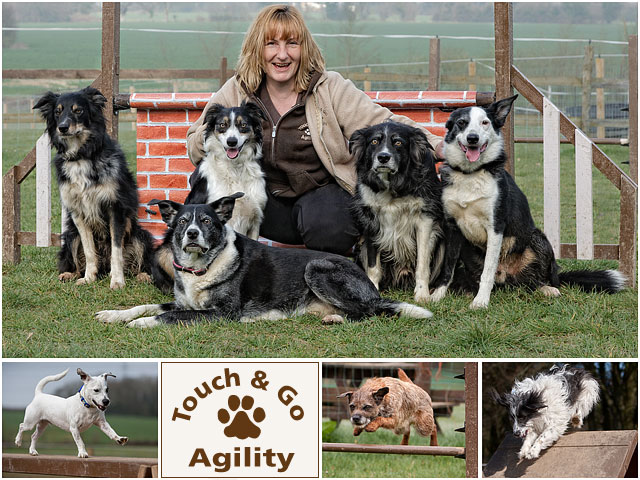 As a young girl, Sue always wanted a dog. Circumstances and family objections meant it was not to be, but now she just can’t get enough of them …

Every dog owner understands that their pet needs exercise, a certain amount of discipline and plenty of love and attention for a happy and contented life.  Traditionally, dog owners have taken their pets to obedience classes for the discipline aspect and, of course, lots of walks for the exercise. Sue, whilst recognising the need for a certain amount of obedience, prefers to combine the two in what is now one of the fastest growing canine sports in Europe, ‘Dog Agility’. 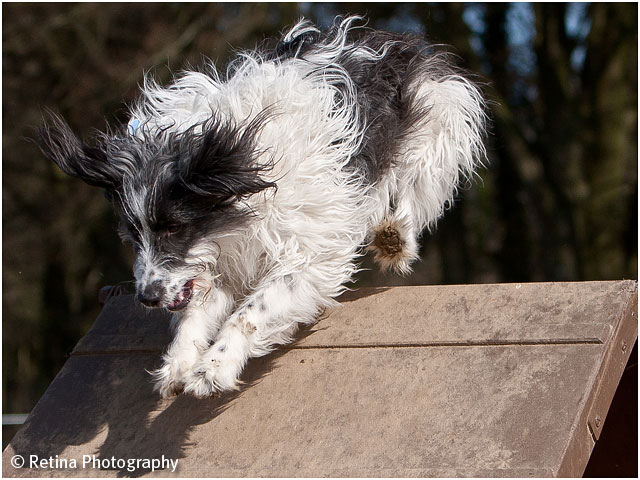 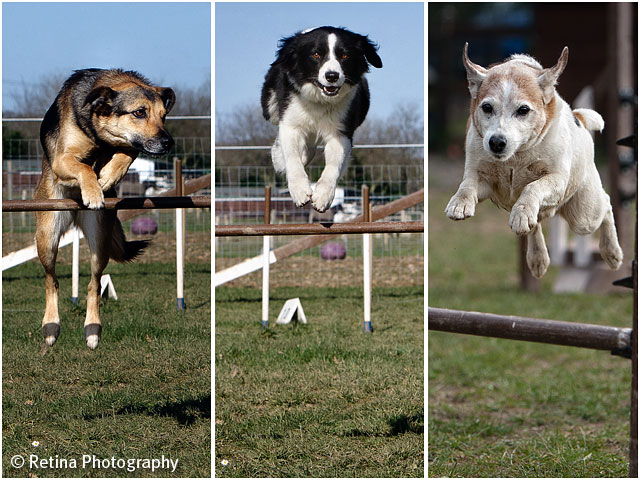 Dog agility is a dog sport in which a handler directs a dog through an obstacle course in a race for both time and accuracy. Dogs run off-leash with no food or toys as incentives, and the handler can touch neither dog nor obstacles. Consequently, the handler’s controls are limited to voice, movement and various body signals, requiring exceptional training of the animal and coordination of the handler. 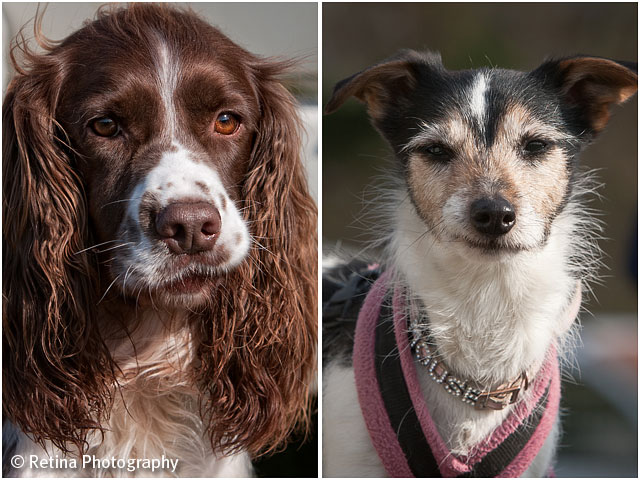 In its simplest form, an agility course consists of a set of standard obstacles, laid out by an agility judge, in a design of his or her own choosing. The courses cover an area of roughly 100 by 100 feet and are made up of grass, dirt floors, or rubber mats, with numbers indicating the order in which the dog must complete the obstacles. 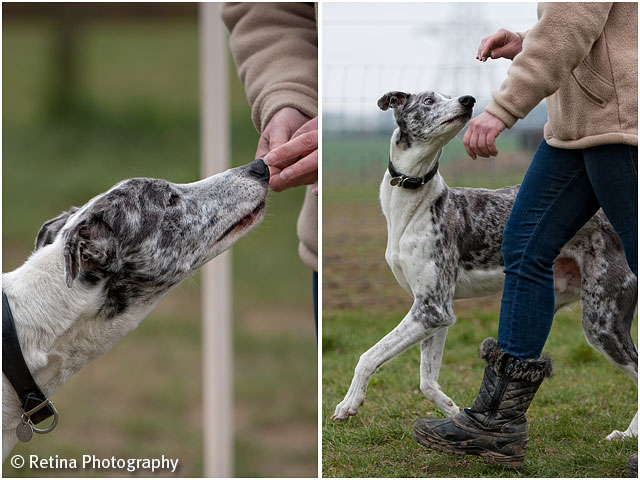 An agility course comprises of up to about eighteen obstacles in total. The course might consist of ‘contact’ equipment such as ‘A-frame’, ‘Dogwalk’, ‘Seesaw’ and ‘Weaves’ along with a variety of jumps and tunnels. Jumping courses are similar, but with only ‘Jumps’, ‘Tunnels’ and ‘Weaves’ and no contact equipment. Beyond this, there are a whole slew of competition classes and permutations. 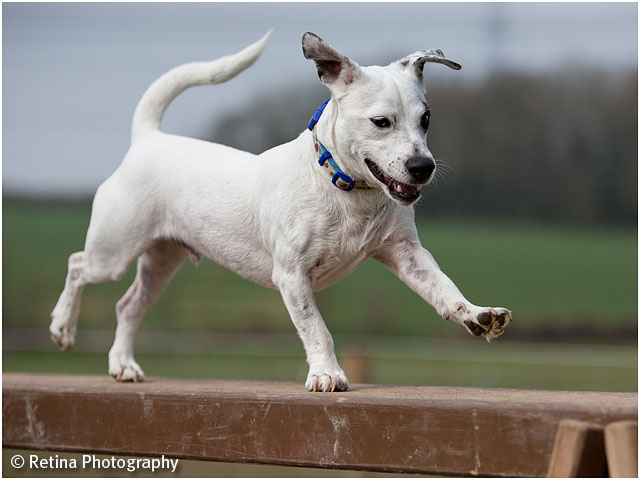 It all started for Sue when she and a friend recognised that there were not enough ‘agility schools’ in their immediate area with the focus on being friendly and fun, rather than just for competition training. In Sue’s words “there is nothing at all wrong with competing, it’s just not our main area of interest”. The two friends wanted to put the emphasis on both the dog and the owner having a good time together, whilst undertaking some controlled exercise without the pressure of competition.

The pair set about putting up flyers and posters in all the local dog walking haunts in their surrounding area. At the very first session, they were surprised, but obviously pleased, when they had thirteen attendees. And so ‘Touch and Go Agility’ was born. Five years later, and now run single-handedly by Sue in her spare time, the club is up to forty plus regular members and is about to jump up to around fifty, but more on that later. 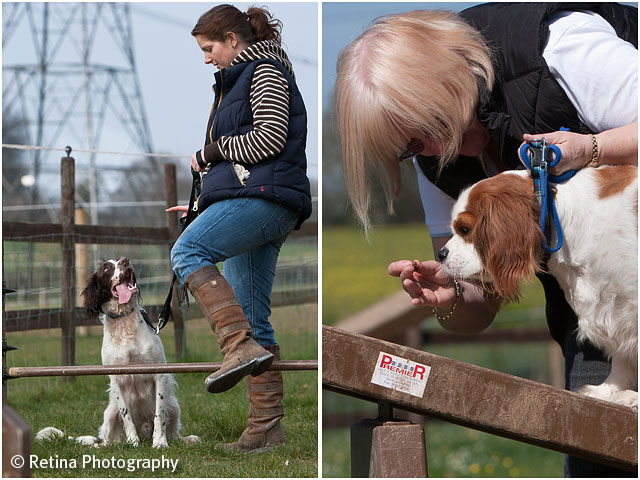 Growing up, Sue had been forbidden from owning a dog by her parents and had to wait until she left home to get married, over twenty years ago, before realising her dream. Her first dog was a rescue ‘Collie Cross Springer’, called Paddy, thought to be about four years old when Sue picked him up. Sue had found him wandering the streets of Normandy, near Guildford in Surrey, in a rather dishevelled state. Upon taking him to the police station, she was told they had nowhere to put him so ‘you had better keep him’. And thus began her love affair with ‘Collies’. After Paddy passed away, around thirteen years ago, her partner, Andy, bought Sue her first Border Collie puppy, ‘Poppy’. On the recommendation of a friend, Poppy was enrolled in a local agility class. Compared to the formal obedience schooling approach, the openness of agility classes had always held more appeal, if for no other reason than it was a good way to give Poppy some extra exercise. 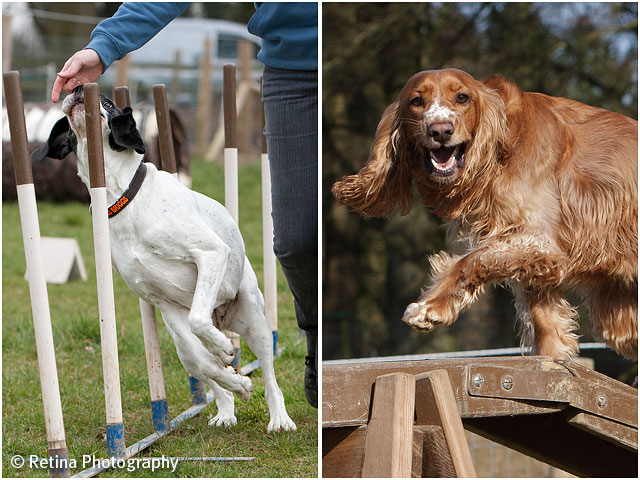 After around a year, Sue found herself at a level where she was taking part in agility competitions. This was as much of a shock to Sue as it was to anyone else, because she doesn’t really consider herself to be a competitive  person. Even though Sue gets placing rosettes and has a modicum of success, she is not really inclined to take competing too seriously. The time needed to be set aside for travel and training, and the not insignificant costs of competing, have restricted how much she is prepared to do. Her rule of thumb is to travel no more than one and a half hours in the car. Anything beyond that is too much of a drain on her time, and takes the edge off what, for her, is an enjoyable day out, rather than a ‘must win’ event. 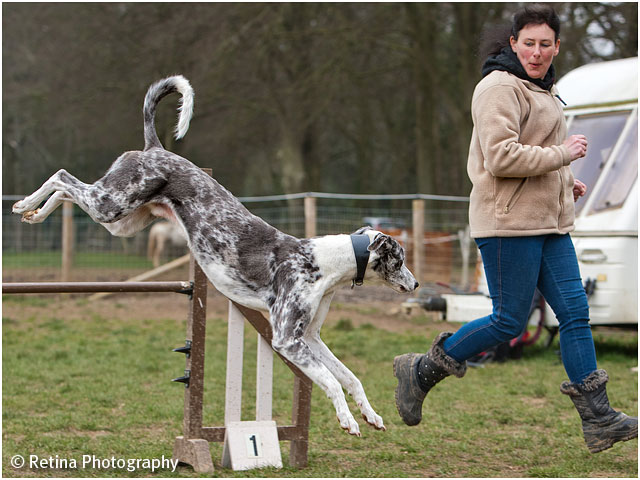 When Poppy was three, Sue decided to get a puppy specifically to do agility with. Enter ‘Bud’, the next Border Collie. Around this time, Andy’s son by his first marriage, Michael, had expressed an interest in agility competitions. It seemed a natural fit with Sue’s background and experience, and so they rescued the fourth Border Collie ‘Murphy’. The intention had been for Michael to train Murphy, but things didn’t turn out between them and so Sue took on Murphy’s training as well. As Poppy got older and began to struggle with the agility training, Collie number five, ‘Guinness’ was the next rescue to be brought into the fold. Guinness, a beautiful ‘Tricolour’ Collie, was not originally in the grand plan. It was only a chance meeting at a dog show, with the lady who had fostered Murphy, that resulted in adding him to the family. Despite Sue saying that she didn’t want any more, the fosterer, sneakily, brought Guinness round to show her, knowing full well that she would fall for him. And of course she did. 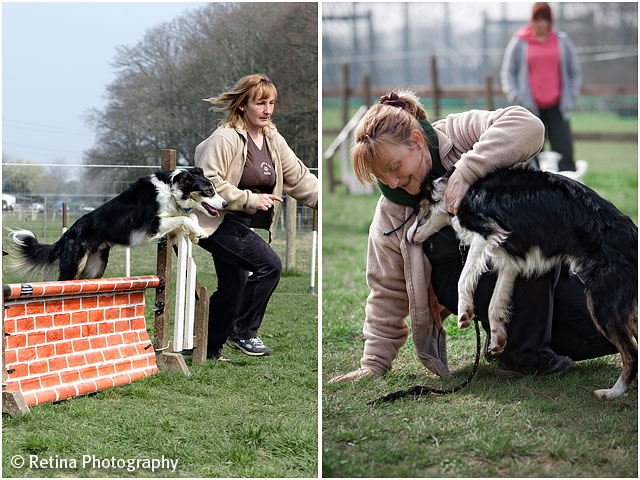 The latest addition is ‘Jack’, a foster dog with a difference. For the first time, Sue was the fosterer. She took on Jack for the three weeks settling in period, prior to handing him over to the new, permanent, owners. Sue was initially concerned about how she would cope with having to give him away. Despite her reservations, she prepared herself mentally and emotionally enough to do just that. But Jack had other ideas. Within the week, he had run away and returned to Sue. Almost immediately, the new owners decided that he was too much of a handful, so Sue and Andy took him on, as he was clearly happy to be with her and the other dogs. 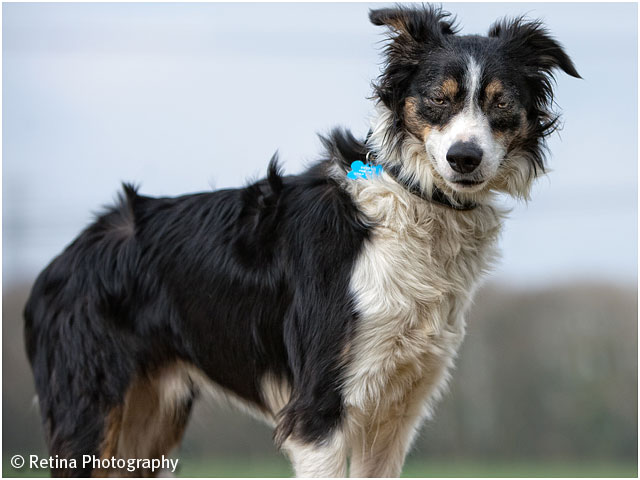 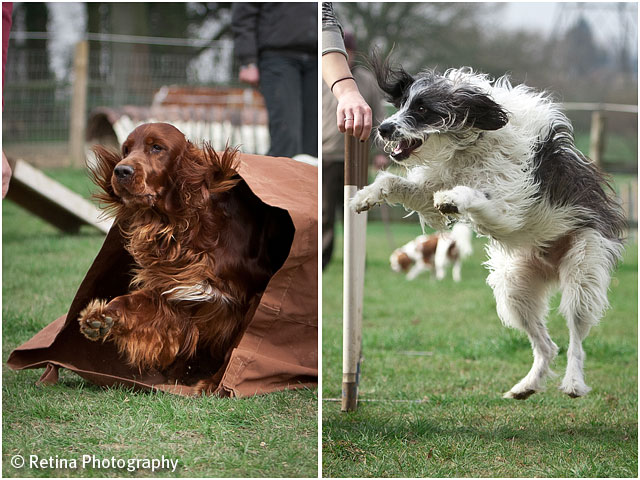 Over the years, there has been a growing interest in competition level training, probably around ten percent of ‘Touch and Go Agility’ class members compete on a regular basis, but Sue is keen to retain the ‘just for fun’ element for the majority of her classes. Come rain or shine, Sue runs regular, outdoor, ‘Touch and Go Agility’ sessions every weekend during the winter, with an additional mid-week evening session during the summer months. Sundays are for the group classes of up to ten dogs for one hour, whilst Saturdays are for the half hour ‘one to one’ sessions. Where possible, Sue tries to keep the classes divided up into competing and non-competing dogs, to give the right sort of balance to the groups. The agility school, based in Lovedean, near Waterlooville, has an extensive range of equipment for dogs of all sizes and abilities. In keeping with Sue’s attitude towards the training, the whole atmosphere is one of friendly, good natured banter, where many of the class attendees have become good friends. Kelly, for example, who owns and runs ‘Whitneys Parlour’ a dog and cat grooming salon, has been coming for a number of years and will often be there first thing and last thing helping to set up the equipment. And then there’s Tina, who has her own dog obedience school. More often than not, she can be found making the tea for all and sundry. The fun element is also emphasised by the annual Christmas and summer parties, which Sue organises for all club members. 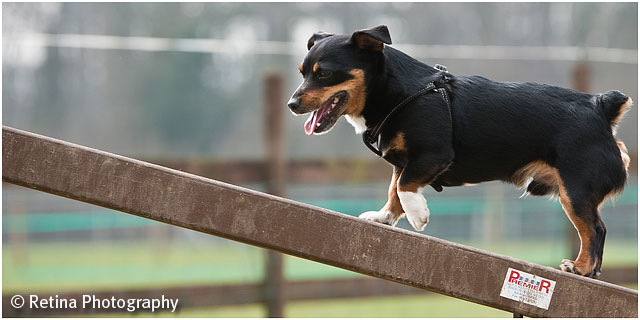 The part-time passion has now reached the point where Sue has to turn people away or put them on a waiting list, because of its popularity. She has just reduced the number of days at her ‘real job’ (Sue is the Operations Manager for the family run garage group, Rusdene Services Ltd.) down to three, with the aim of expanding the number of classes that she can run for Touch and Go Agility. In an ideal world, she would like to build the club into a full-time business. So fingers, or should that be paws, crossed for the future. 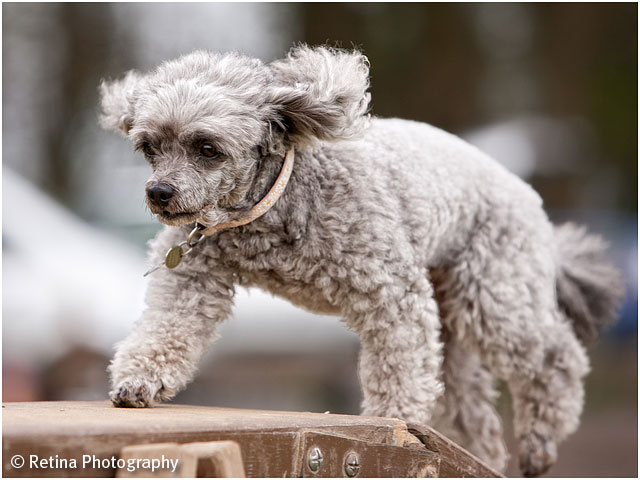