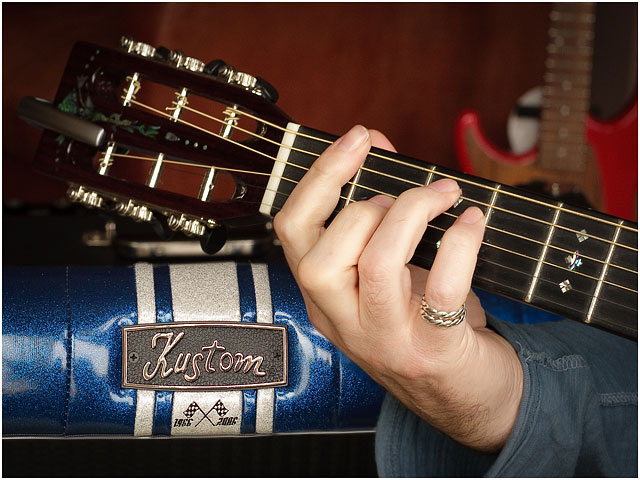 So what’s a young boy to do?

Eight years old and a well meaning relative hands you a beaten up second hand guitar.  Little did they know what effect this simple act would have on the young and impressionable Kevin – but not in the way you might think. Armed with said guitar and a copy of Bert Weedon’s ‘Play In A Day’ best seller, Kevin set forth to the Bobby Shaftoe page and attempted the tabs and chords shown …

After 20 minutes of this he gave up. Strange… it just didn’t sound like Bobby Shaftoe. What WAS the problem? Did he lack any natural ear for a tune? (maybe) Were his hands too big for the chords? …too small maybe?No. Coming from a non-instrument playing family, he’d just naturally picked up his guitar in the ‘Lefty’ or ‘Southpaw’ style. He was (and still is) in fact what is known as an ‘awkward’ guitar player and didn’t realise the strings and the chords needed to be reversed right-to-left.The guitar went back in it’s box under the bed.One year later, and with an upside-down, re-strung guitar and new resolve, he set upon Bobby Shaftoe and all was well with the world of Small Folk.

At school his drama teacher owned a large open tape reel to reel recorder, on which he would record sound effects for the school plays. So along with his love of music, synths and guitars, the recording process became of much more interest, and at 14 years old he employed two mono cassette tape recorders as his ‘sound on sound’ multi-recording setup until he could afford something better years later.

Forty two years on and the flame still burns brightly, if occasionally turned down to slightly less than eleven. From the humble beginnings of playing along to Pink Floyd and Mike Oldfield to performing live at the Albert Hall with his band ‘An American in Paris’ in the 1980’s, Kevin still can’t put that guitar down (although not the same one he started with).

Along the way he’s done the odd bit of session work, been played on the radio and appeared on MTV Italy’s San Remo Rock Festival. He’s recorded at Jimmy Page’s Studios and played the original Marquee Club in London. And… wait for it…been awarded his Blue Peter Badge for the band’s contribution to raising money for the ‘Appeal for Kampuchea [Cambodia] in 1988.

The band broke up in typical Spinal Tap style in 1990 while still signed to Bill Wyman’s (Rolling Stones) record label – but this didn’t stop the creative process. After a brief hiatus, Kevin continued writing and recording and produced two solo albums under the name of ‘Big Blue Car’ (bigbluecar.co.uk) of which samples can be found at his myspace internet site (www.myspace.com/bigbluecarmusic). 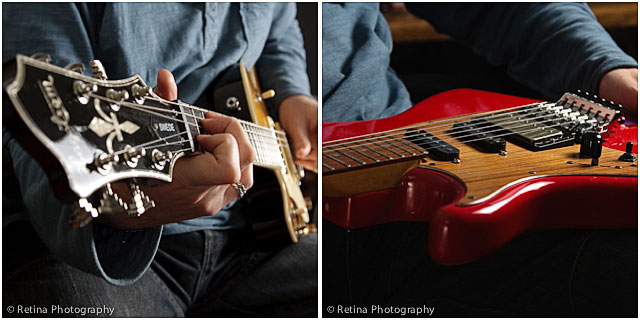 All this sounds like a full time career, but surprisingly it’s not what pays the bills. As part of the creative mix, Kevin is a successful Graphic Designer with his own company Arc-Digital (arc-digital.co.uk). He continues to write and play when the moment allows. He has recently helped form LUXX (luxxband.com) to let him do one of the things he loves best, perform great music in front of an appreciative audience.

So what’s been the highlight so far? Well there had been so many – especially meeting well known people you admire, who turn out to be ‘decent and down-to-earth’. But according to Kevin one of the highlights was “sitting down of an evening and watching ‘Spinal Tap’ for the first time with Bill Wyman of the Rolling Stones at one of his houses (Gedding Hall, in Suffolk – formerly owned by the Kray twins), around the time that we were first signed to his record label”.

Phewwwww, I’m worn out just from writing it down!