Always getting my feet wet.

A sailmaker by trade, with his own successful business (Sail Style) based on Hayling Island, Simon is also one of the longest-serving crew members with the Portsmouth RNLI. With nearly ten years service under his belt, he has the enviable position of being able to combine his passion for water sports, with the desire to give something back to the community.

In this, the first part of a two-part story, we hear about Simon’s early sailing successes and the origins of his sailmaking business. 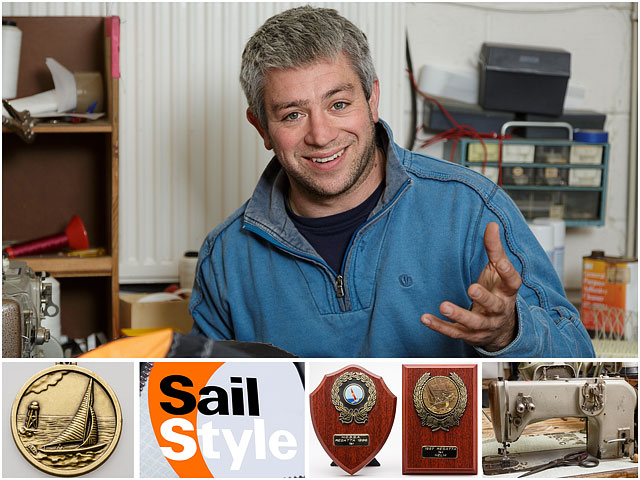 RP. Have you always lived in Portsmouth?
Yes. Pompey born and bred. My family, going back several generations, are all from here.

RP. I’m told that you’re a real life water baby?
You can’t keep me away from it. I started sailing when I was eight years old and have never looked back.

RP. Was that through a school outing or something?
No, it was my younger cousin who got me into it. Bearing in mind that I was only eight, so at the time he must have been seven. He and his family had a boat that he took me out on. I was hooked from the word go.

RP. This was just an occasional thing?
It started out as just another water sport that I thought I’d try, loving anything to do with water. But it soon became quite serious. I was lucky enough to get encouragement from my family, considering that sailing can be such an expensive sport. They’ve been saving up ever since [laughs]. Once I got into it, my sister also decided to give it a go, which added to the national debt for my parents! At least when we got a boat, both of us could get to sail it, helping to keep some of the cost down. Also it was good that we had a shared experience.

RP. Were you sailing competitively?
Definitely. I joined a local Portsmouth club called ‘Locks Sailing Club’ and started racing with them, then later outside of the club. I progressed up through the ranks and, with experience, eventually got into National Squads. The pinnacle being the Olympic Development Squad 2003 – 2004. But the first serious sailing was when I got into the Hampshire schools squad.

RP. How many made up the team?
The Hampshire schools squad consisted of thirty of the very best sailors from all the schools and sailing clubs in the Hampshire catchment area. I raced with that squad for a total of five or six years. I only missed out on one year in the middle, where I had to change boats. As a result, my grade dropped so I had to get back up to speed again for the following year.

RP. Any successes?
I won the Hampshire schools regatta in 1999, which put me into the English Squad for the Nations Cup. As a team we went over to Ireland to race. The wind was light and as a result we didn’t become great contenders, but all in all a good experience

RP. So at this point your coming up to eighteen  …
Yes, just leaving college and about to step into the world of work

RP. Were you aiming for something sailing related?
No. I got into University as a placement and decided that, for some strange reason that I still can’t really explain, I wanted to do electronic engineering. However, I figured that at least if I’m working I can do a lot more sailing and I have never been the academic type. Anyway a friend who I’d taught to sail, along with his daughter, offered me a job in his IT company.

RP. How did that go?
I was there for about eighteen months more or less, selling Audio Visual equipment, until I was about nineteen. It gave me some money, well, enough to play anyway [laughs]. Then I decided that having come straight out of college into work, I should really do a bit of travelling, or something, before the opportunity passed me by. So I got a job with ‘Sunsail’ out in Turkey, teaching holiday makers to sail. I would go out to Turkey for the summer season, then come back home to Portsmouth for the winter.

RP. This is when you got into Sailmaking as a trade?
When I was sailing at home and a sail needed to be repaired, I would take them to a local sailmaker in Portsmouth (Radical Style – The name has since changed several times and they now specialise in making bespoke, top of the range, car seat covers). Over time they got to know me quite well and we used to have the usual banter that you get in such situations. Anyway, I took a sail in for repair one day and, more for their entertainment I think, they said something like ‘you’ve been coming here long enough, you should be able to do it yourself now. There’s the kit, get on with it.’ So I jumped in with both feet. Of course I was rubbish at it, but I was determined not to make fool of myself so stuck at it. They gave me some pointers and such like, and it kind of grew from there really. My cousin’s father knew the shop owners, so we started to go along and help out with the odd bits and pieces. I never thought that it would end up as my career, but working with friends in a sport that I enjoy, that’s the way it turned out.

RP. Is sailmaking seasonal?
Sort of. When I first started it used to be that the last two weeks in September and the first two weeks in October would be the quiet month for that block, the rest of the time it would be busy. Since I started out I’ve diversified a heck of a lot which has meant that I don’t really have any quiet periods. In fact I’ve just completed a whole batch of vinyl banners for Puma, Match of the Day Magazine and a sports shop, all for a football ground up in Manchester. What I do now covers a whole range of things, from making a cover for a bridge on the M3 for Balfour Beaty right through to body bags! I do a lot of work for Fat Face and Crew Clothing, making bespoke changing rooms and cushions for the interiors of their shops. So as I say, I’ve diversified out of the main trade to sustain the business.

RP. Which part do you enjoy the most?
I like the challenge of creating something unusual.

RP. Anything recent that comes to mind?
Fat face once did a store refit and they wanted moulded plastic water bottle shapes for changing rooms. These were behind schedule, so they came up with a ‘quick’ new design to keep them going. A week-long job that I completed in two days, I do like a challenge! The design they decided upon was based on a ‘duffle bag’. That’s all I had as a design brief. Duffle bags equals changing rooms [laughs]. That was fun. I created a framework to go inside the ‘bags’ to support the canvas, which would then hang from a hook. Obviously they had to be large enough to cater for all sizes, so they were pretty big. They had eyelets with ropes at the top and even had buckles that did up down the side. I was quite pleased with that one. Not just the work, which goes without saying, but having the freedom to work out the full design of it as well.

RP. Is it just you running the company?
It was when I first started out, but it’s now a partnership with my parents. That was started about eight years ago. The first year I was on my own, then I decided to purchase another business and needed to expand. So apart from helping out financially, Mum and Dad joined the team. Mum, a former teacher for fifteen years, was also handy with a needle and thread, so she was a natural for helping out making boat covers. Dad does the paperwork and accounts, and helps out on the big jobs that need the extra muscle. This frees me up to concentrate on bringing in the business and crack on with the jobs. It works well. Like any family we have our occasional disagreements, but we’re going from strength to strength so we must be doing something right.

RP. It’s great that you all have a common interest.
The irony is, that when I was at school and it became time to do my two weeks work experience, I went to Vosper Thornycroft to do electronic engineering on the river Itchen, over in Southampton. What I wanted to do was go to the local sailmakers, which was a friends business, and do that. I remember them saying that ‘you’re only going to go there, have some fun and not really learn anything. You won’t be doing that for a living so it’s the waste of an opportunity.’ And here we are today, all working together at a successful business.