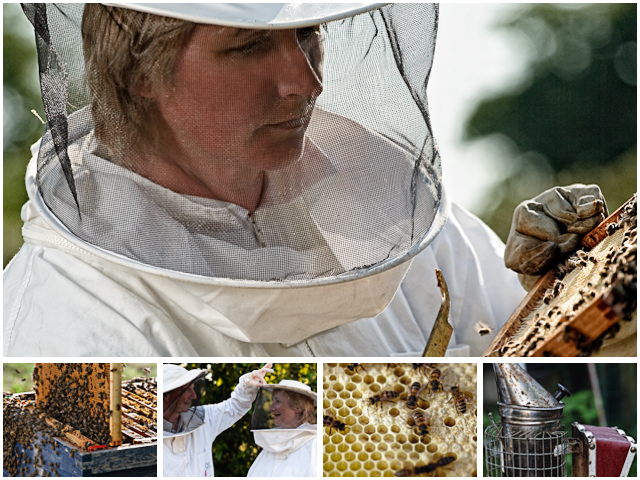 As the saying goes, ‘if you can’t beat them, join them’. If your husband is a beekeeper, or ‘apiarist’, you had better get used to the idea of spending a lot of your free time with bees …

Clare’s husband Chris is a full time lecturer in the School of Biological Sciences in Southampton University, and a part time beekeeper. His work as an Entomologist, lecturer, geneticist and pest control expert, led him into research on the varroa mite, an external parasitic mite that attacks honey bees. As part of his research, Chris took a beekeeping course with the Meridian Bee Keepers’ Association and, around five years ago, built his first hive. It would seem that beekeeping is not something that you just ‘dabble in’. It requires rigorous and methodical cleaning, feeding and maintenance, all of which takes plenty of time. If your partner, in this case Clare, is not involved, say goodbye to any kind of social life together. As soon as Clare realised she would be playing second fiddle to tens of thousands of flying insects, she decided to act. The following year she completed the same bee keeping course as Chris, and has since taken an active role in the care and maintenance of their hives.

Not that it’s been all plain sailing. Their first hives were kept in the back garden close to the house. Not something that endeared them to visitors who always had one eye, and ear, out for the ‘additional guest’ or two. As Chris and Clare’s experience grew, so did the size and number of hives. They sought out, and found, a willing local farmer who was happy to have two hives placed in one of his fields. It is, of course, a mutually beneficial arrangement. The farmer gets extra help with pollinating his crops, and the bees get the pollen they need for the honey production. Chris is able to study the bees and, as a bonus, gets to keep and sell the produce which helps to cover costs. Everyone wins. Unfortunately, the third year on the local estate was to be the last. The land owner was forced to split up the estate for financial reasons, and the new owner already had a long standing agreement with another beekeeper. So Chris and Clare had to seek pastures new for their brood. 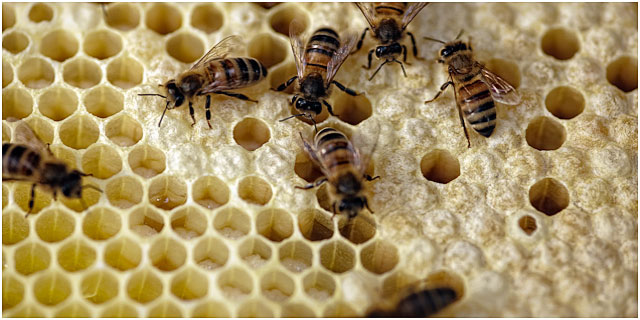 Bee hives, when moved, have to be sited at least three miles from their last location. This avoids the possibility of them emerging from the hive and spotting a familiar significant landmark that will guide them back to the spot where the hive used to be. If the environment is totally new, the worker bee will reprogramme to return to the new home site and will not try to return to the previous site. So, next stop, the New Forest. This in itself was interesting in that Chris and Clare were given access to sites that the public rarely, if ever, got to see. However, this move turned out to be only temporary as, due in part to the recognition given to Chris’s work, the University has offered the use of a site closer to home.

The queen bee can live for up to five years, but the workers average only six weeks during the height of the summer season. Each bee has a specific role within the colony. For example, nursemaid, wax builder, flier or guard. Some will start as cleaners, preparing the vacated brood cells for the Queen to lay fresh eggs. After four days, the worker bees feed the older larvae with honey and pollen moving on to feeding young larvae a few days later. After two weeks they are processing the nectar into honey by evaporating the water. They are also making wax and packing the pollen that is brought in by the foraging workers. At nineteen days, they become guards and begin to make orientation flights to establish the routes back to the hive. Within three weeks they are out foraging. Eventually, they die out in the fields when their wings simply wear out. Bees that are born and live during the winter months have a longer lifespan, often as long as several months. The reduction in flying sorties at this time of year extends their lives considerably. Their primary role is to keep the queen warm enough, at around thirty-one degrees Celsius, to survive the winter. 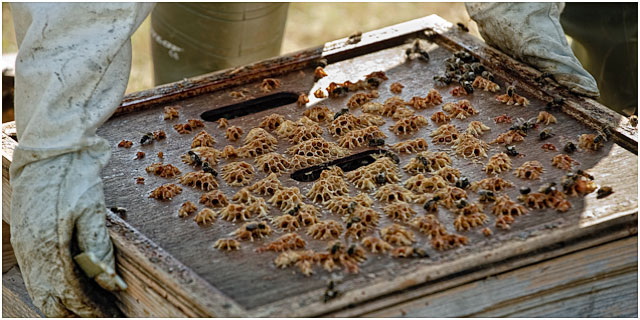 When worker bees decide to make a new queen, either because the old one is weakening or has been killed, they choose several small larvae and feed them with copious amounts of royal jelly in specially constructed queen cells. Royal jelly is a honey bee secretion that is used in the nutrition of larvae, as well as adult queens. Chris and Clare have to be vigilant, as this is the point where a new queen and her escorts ‘swarm’ to pastures new, leaving a very depleted hive. However, vigilance pays off as hives can be split to create new colonies or a swarm can be captured to create another hive.

Come the spring, around March time, the foraging begins all over again. Bees will start with such plants as Crocus and Snowdrops and continue through until around September when one of the few remaining crops of any use will be Ivy. The type of crop that is chosen will determine the final flavour of the honey. Unlike the mono-culture, mass production, environments of large businesses, the honey from most independent beekeepers will be a hybrid of whatever the bees happen to choose for their local nectar source. 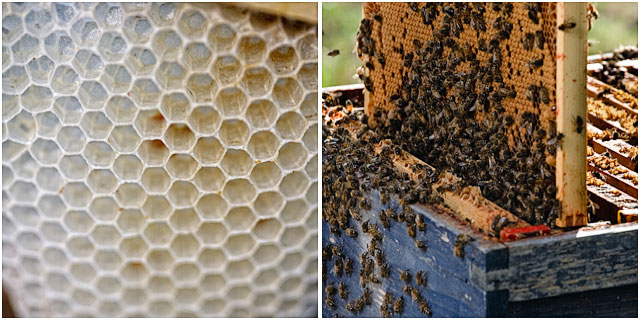 In terms of who does what, it’s usually Chris that extracts the honey using a centrifuge, kept and run in the shed at the bottom of their garden, and Clare who sells the produce locally. They both maintain the hives, which is a never ending routine of making their own hive frames during the winter months. These teak frames have wax sheets added to encourage the bees to form the honeycomb structures that we are all familiar with. Then it’s on to feeding, harvesting and checking for disease during the spring and summer seasons. 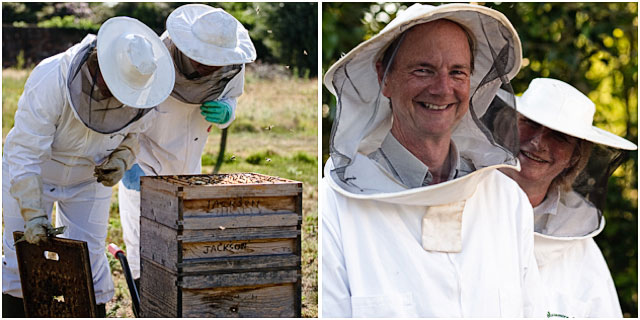 Chris, apart from pest research, has also explored the use of Radio Frequency Identification (RFID) tags, as a means of tracking bee flight paths and the effects of pollution. He also organises undergraduate summer, bee-related projects for some of his third year students, and is carrying out further research into how bees identify plants using the ultraviolet electromagnetic radiation.

With all this going on, I doubt if either of them have a lot of time left to actually enjoy the end product!