Say hello to Brenda, a drummer with the Batala Portsmouth. Batala is an international music group that plays a style of samba, called samba reggae drum music, which originates in Salvador de Bahia in northeastern Brazil. 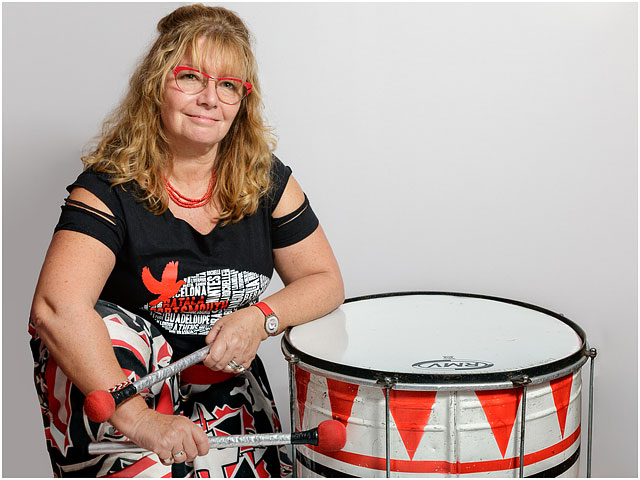 How long have you been in this area?
I’ve lived in Portsmouth fourteen years, but I’m originally from Bexleyheath, South East London, which is just past Greenwich.

Is that where the family was from?
Yes, but my dad and I moved to St. Ives in Cornwall when I was seventeen. I’ve still got really strong associations with that area, even now. My step mum still lives there; my dad has since died, but I go down there quite a lot.

Did you start work while you lived there?
I lived there non-stop for about fourteen years, and became a potter. I did an apprenticeship and worked at Leach’s Pottery, which is a famous name in the pottery world.

Ref: The Leach Pottery, St Ives http://www.leachpottery.com/
Founded in 1920 by Bernard Leach and Hamada Shoji, the Leach Pottery is among the most respected and influential studio potteries in the world. Over the last hundred years it has forged the shape of studio pottery production in the UK and beyond.

Is that something that you still do?
I’ve got a wheel and a kiln here, but the work I do now is very different from when I worked at Leach Pottery.

When were you doing the pottery?
The apprenticeship was in Penzance when I was 19 then I went away to art college for four years. When I came back, I worked in St Ives and eventually got a job in Leach’s in about 1980. 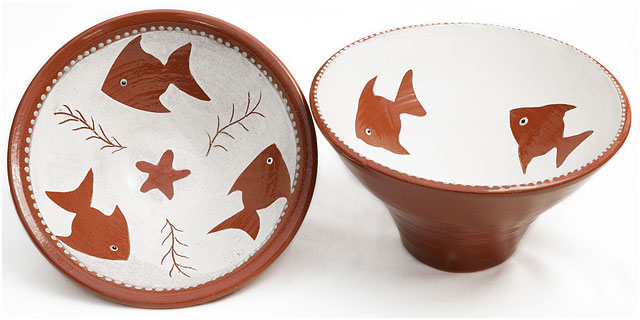 Why did you leave pottery as a career?
I couldn’t survive on the pay. Then, one day, I got talking to somebody in the pub who was an art teacher in Camborne (15 miles west of Penzance), and she suggested that I consider teaching. I was very uncertain about it, but I applied and went to teacher training at Brighton for a year. I thought I’d give it a go for five years, get out of debt etc. Of course, the mortgage came along with all the usual expenses, and I ended up staying in teaching for thirty years [laughs].

Were you teaching in Brighton?
No, I started off in Totton, Southampton, then moved here to Purbrook Park School. 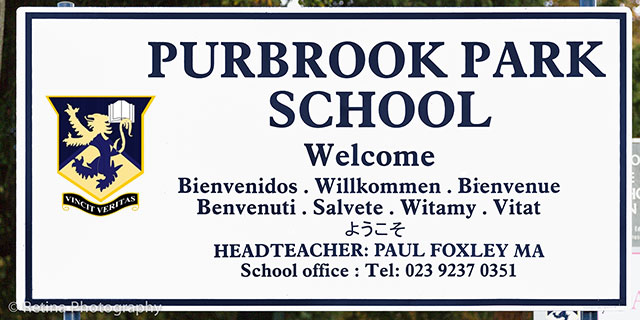 When did you finish there?
I retired three years ago. I was head of four subjects by the time I left, which were music, art, dance and drama. I love all aspects of performance and art. All of it; I love it. Which is probably why I eventually joined Batala Portsmouth.

Did you have any interest in music outside of school?
I’ve always liked live music, but have never been able to play an instrument. Actually, that’s a big regret, that I never learned to read music. I tried. I got a piano, but that didn’t last long [laughs]. I always liked performing; not to be the star of the show, but to be part of a team.

I always liked performing, not to be the
star of the show, but as part of a team.

How about amateur dramatics societies?
No, nothing like that. The problem was, it was such a busy job, that I didn’t have a lot of time to do other things really, but really good to be so involved in all of the arts.

Officially retired in 2011?
Yep [laughs], although for the last year I went in for one day a week, because I wanted to see my students through their GCSE’s. So, really, I finished completely in 2012.

So you closed the door …
… And never looked back; not for a moment.

Had you been preparing for retirement, mentally or with outside interests?
No, I’m not a planner like that really. It’s kind of ‘let’s see what happens’ with me. I do remember walking down the school corridor about four years before I retired, thinking, “oh my god, what am I gonna do? I love this job so much.” At that time, I was teaching a really interesting GCSE course. I thought “I can’t believe that I’m not going to be doing this anymore.”

oh my god, what am I gonna
do. I love this job so much

But then the exam board stopped that GCSE. It didn’t exactly sour things, but I was no longer able to teach such a wide variety of skills such as animation which makes it so much more interesting. Also, changes throughout the profession meant that there was a lot more admin and bureaucracy than there had been. As head of four departments, it all became ‘admin heavy’, even though I was still teaching a full timetable. By the time I left, I was ready to go. Doing that one day a week was a good move; it allowed me to back out gently.

By the time I left teaching, I was ready to go.

After the honeymoon period of not having to go into school anymore, what’s next?
I’d always loved making things, whatever kind of material it was. One of the priorities was to get a kiln to return to pottery. I already had a wheel, which was being thrown away and I had started to do a little bit of felt making work after attending three residential courses in the Lake District with Caroline. Then I thought about doing workshops, making use of my teaching skills.

What does felt making entail?
It’s actually making objects from felt, but you also make the felt itself as well, no seams, no sewing and you work with a range of the most beautiful colours.

So, pottery and felt making …
… and I’d already joined the band before I finished teaching.

Please miss, can I be a drummer?

How did you get involved with Batala Portsmouth Samba/Reggae Band?
I’d not long split up with my partner. I was OK, but a bit directionless. This was about November 2007. Anyway, I was in Waterlooville one day and the band was playing. When I heard them, I actually cried with emotion and I had to go away. I thought, “I can’t watch them without crying,” but I went back three times. The third time, I actually managed to stay there, but I was kind of choked. Other band members have told me they felt the same on seeing the band for the first time.

When I saw them playing I actually cried with emotion. 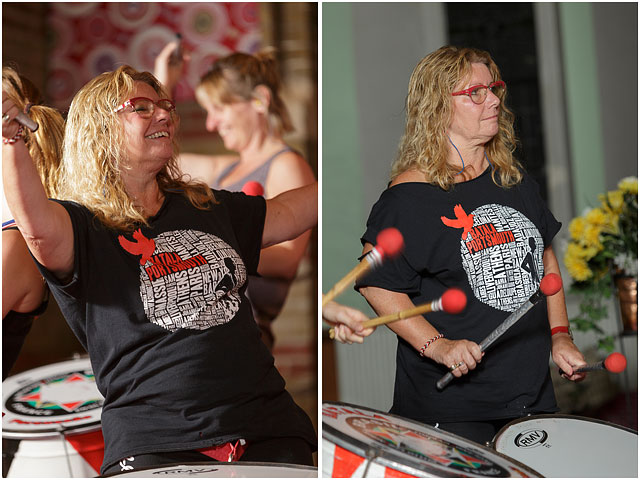 Do you know why it had that effect on you?
I’m not sure. There was something about the sound that just really got to me; really primal, absolutely amazing and they were so obviously enjoying themselves. I thought to myself ‘I want a bit of that’. After they’d finished, I was having this internal argument with myself about whether to ask about joining them or not. One voice was saying, ‘go and ask’ and the other voice was saying, ‘oh they won’t want me, I’m too old, and I can’t play the drums anyway’ [laughs]. I’m quite shy in some ways, so it was a real dilemma. I eventually plucked up the courage to go and speak to them. I needn’t have worried, of course. They said “yes, come and rehearse with us and see how you get on.” Caroline joined at the same time as me.

Caroline’s got a lot to answer for then?
She and I used to meet up once a week for the felt making. The trouble was that it had turned into more of an excuse for a natter, and not very much felt making was going on. So we knew that it was time for a change. I told her about my experience, and convinced her to come along as well. After about three rehearsals, they let us put on a drum. I was hooked from the first ten seconds. After that, everything got put out-of-the-way apart from the drumming. [Laughs]

I don’t think I missed a rehearsal,
or a gig, for about two years

Stay tuned, next time we get to hear all about the Batala Portsmouth and some of the fun they’ve been having