In part one, Tony told us how he served with the Royal Navy, both above and below the waterline, played various musical instruments and has been with TS Active for 37 years. We now hear about his passion for the art of ‘court medal mounting’ and The Fort Cumberland Guard. 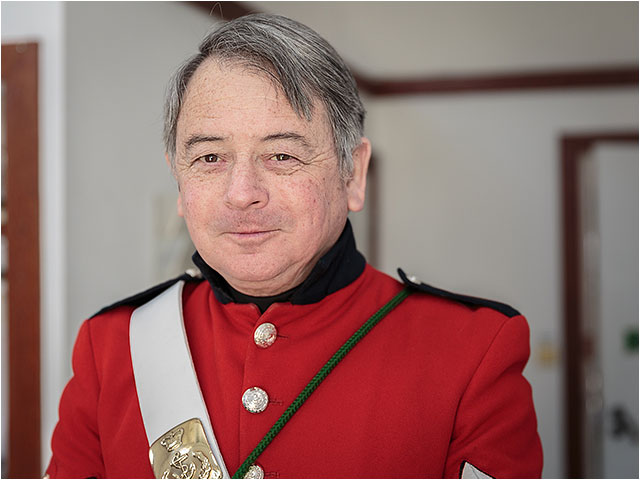 Medals – Why and how?
Yeah, your guess is as good as mine [laughs]. It started because I had my dad’s medals and I wanted to take them to Remembrance Sunday with me. The trouble was that I looked like a bloody Christmas tree with one set on one side, and another set on the other. I’ve often had them in my pocket, but I’d never worn two lots. I’m not a fan of that kind of presentation. So I decided that I wanted to wear them properly, at least in my mind. Anyway, the first time I had a go at mounting them, I didn’t do a very good job. But, over time, with research and cribbing ideas here and there, I’ve arrived at an approach that I’m happy with.

How long have you had this as a hobby?
I’m trying to think. It must be about ten years, more or less. 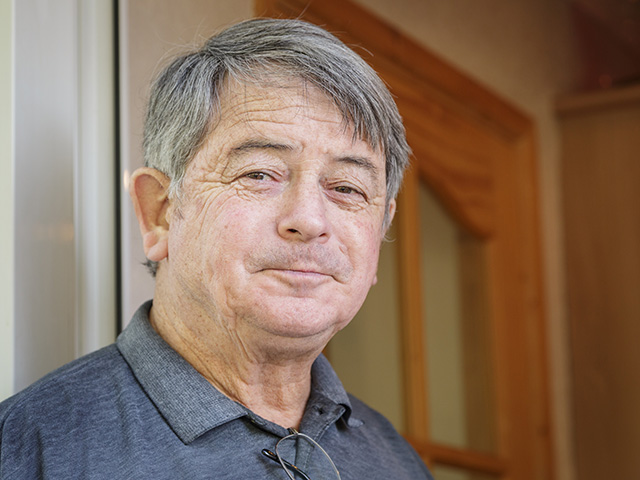 What’s the official name for it?
It’s called Court Mounting.

REF: Medal mounting styles
Court mounting of medals is when the medals are fixed to a backing. It’s origins date back to the reign of Queen Victoria because she didn’t like the noise made by her courtier’s medals ‘chinking’ together. It is now the most common form of medal mounting found in the UK Armed Forces. When medals are not mounted on a backing they are said to be ‘Ordinary’ or ‘Swing style’.

Is there a recognised Court Mounting organisation?
Not really, but I had to register with Worcestershire medals, via a recommendation, as a person whose work was of an acceptable standard.

What do you need in the way of materials?
Needles, cotton, glue, double-sided tape; all that sort of thing. Obviously, there’s the different ribbons and broaches. I buy cigarette lighters, even though I don’t smoke, to seal the end of the ribbons, so they don’t fray. Tons of credit cards.

Where do you get the credit cards from?
People give them to me, after they’ve expired of course [laughs]. There was a local taxi firm that had a load printed up and they were wrong. The woman who worked in the office at the time, knew about my hobby, and passed them on to me. I’ve stopped taking them now because I have so many.

How do you charge for what you do?
That’s where it’s a bit tricky. If you were to ask me how much would it cost to mount X, Y & Z, I wouldn’t know until I’ve finished the job. I like to try to reuse as much of the original materials, the ribbon and the broach, as possible. That keeps the cost down, but I won’t know if that’s possible until I do the work. If it involves adding an extra medal, a new broach will be required, but I only charge the cost price to me. As I say, it’s a hobby not a business, so I’m happy to break even, more or less [laughs]. If the truth be told, I probably run at a loss, but I enjoy doing it, so that’s my choice.

What do you think the attraction to medal mounting is for you?
I’m quite proud of our Services heritage and I like to see traditions upheld. I suppose you could say that the wearing of medals is shorthand for our history and the sacrifices that have been made. It can be very personal or very public, but I like to see medals presented in the best possible light. I’ve seen quite a lot of poor quality work and, frankly, wrong as well. I like to think I make a pretty good job of what I do and I take pride in it.

Wrong, in what way?
The order in which medals are mounted is different for each person. The campaign date sets the initial order. If you’ve been given an award, that’s senior to a campaign medal, so it should be placed before it in the presentation. Foreign medals always go last. They all have a place and order.

How did you learn what’s the correct formats etc?
I have medal books and charts, but mainly through background research and experience.

Any tricks and tips?
I like to see the medals hanging true. The best way to achieve that is to have a flat base for them to hang from. I put a piece of plastic credit card in the middle of the ribbon supporting the medal. These days, I mix and match cardboard with credit cards as the base underneath the ribbons. One trick I like to do, which identifies the work as mine, is to add coloured electrical tape at the ends of each set to match the colour of the ribbons.

How are the ribbon colours chosen?
It’s all to do with heraldry, but I’m not sure which department in the MOD (Ministry of Defence) chooses them. There are plenty of books and charts with references for the various campaigns, battles, and which country has which colour etc.

Do you mount medals for display purposes only?
I mainly do them for wearing, but I have put together presentation showcases when asked.

How many medals, approximately, would you say you’ve mounted?
I would guess, and it is only an estimate, but it must be over five hundred sets [can we confirm this?]. A set is anything from one to five or six medals. I get return visits from people who have gained a medal, or an award, and want it added to an existing set.

Is it only the armed services that you mount medals for?
No, far from it. I’m actually about to start on a set for a member of the British Fire Service Association. But I’ve covered a range of services including Police, Fire and Ambulance, local and regional groups and associations.

How do people find you?
It’s all been word of mouth. Because it’s not a business, I don’t advertise. All of my work is from recommendations. It’s not only for serving personnel, of course. A lot of people come to me with their parents’ medals which, like me, they would like to wear on Remembrance Sunday, or have on display at home.

Any medal that you’ve not mounted that’s on your wish list?
I’d like to mount a Victoria Cross. I haven’t done one of those yet.

The Victoria Cross is awarded for…

most conspicuous bravery, or some daring or pre-eminent act of valour or self-sacrifice, or extreme devotion to duty in the presence of the enemy.adjusted to be center block

Have you ever refused to mount medals?
I don’t like doing ‘bling’ jobs, I think it’s disrespectful, but I’ve never turned anyone away who has asked. If I don’t think the person is entitled to wear a particular medal, I’ll tell them. More often than not, they will change their mind about it [laughs].

REF: Bling Medals
Unofficial medals, sometimes called “bling medals”, are those not awarded by, or approved for wear by, the Sovereign.

How long does it take to do a job?
If I stick at it, I can do a set in a day. But it usually spans a couple of days.

Were you involved with this year’s 200th anniversary Waterloo celebrations?
Yes, Worcester medals struck a commemorative medal in celebration. They issued one free, per household, for the Waterlooville NMBVA. I organised a dinner at the local lodge.

REF: Waterlooville is steeped in history from the battle of Waterloo.
The original public house, The Heroes of Waterloo, was so named because, on its opening day, in 1815, soldiers who had just disembarked at Portsmouth, returning from the Battle of Waterloo, decided to stop there and celebrate their victory. According to local legend, many of them settled there. The pub was renamed in their honour and the area around it became known as Waterlooville.

How did you become involved with the Cumberland Guard?
When I was playing bugle and drums in the HMS Nelson band, one of the guys said that they were looking for drummer and bugle players for the Cumberland Guard. I’d seen them putting on displays on HMS Warrior (Portsmouth’s Iron Ship) and in the Dockyard, and I was intrigued. I went along to see what they were all about and ended up staying. To start with, I wasn’t overly interested in the history, but, as I started to get involved, I got a bit more into it. I’ve learned loads since joining, of course; they’re a good bunch.

Any events that you would like to raise awareness for?
My cadet guard display team, ‘No orders’, are always being called upon for appearances, so it’s worth checking our website for the latest events.

With everything else that you do, it sounds like you’re going to be busy?
As usual. It’s a good opportunity for the band to show off what they can do. I’m looking forward to it.